Places to Visit Arizona Wrap up -You’ll be a daisy if you do.

Arizona Wrap up -You’ll be a daisy if you do. 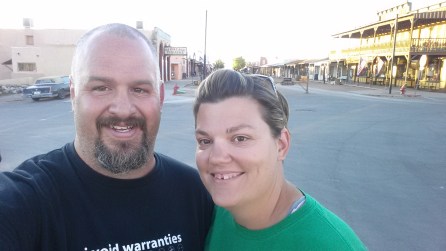 Our time in Arizona was wonderful.  We only saw a small fraction of what was available to see. There are 3 other sides to the Grand Canyon and a river that runs down the middle of it.  There are other desert sights, the painted desert, a giant crater, quartzite to name a few. I have a feeling that what we miss will be as great a calling as what we will see.

What we did see was amazing, serene, educational, and unique. If I could spend more time there I would. There are plenty of opportunities to go back in the future, but much of this will likely be a once in a lifetime event. But alas, there is always more to see.

Our last stop in Arizona was the famous Tombstone.  I was sooooooooo looking forward to this.  Not like other things I have said, this was more a childhood (teenhood-ish) dream.  The most recent blockbuster movie came out in 1993.  Once it came to .. er hem,  VHS, my family purchased it asap and we spent the next several weeks .. months … years watching the movie on a regular basis.  It was my fathers favorite movie (I think). He would laugh so hard every time we watched it. He had a fascination with Doc Holiday’s character and it’s/his nonchalant, I’m going to die anyway, kind of attitude. There is a special level of honest that comes from the realization you are dying no matter what.  I hadn’t watched Tombstone since about the time my father passed away.  It’s funny, I can still hear his laughter.

You have to understand something about my dad to understand what I mean when I say laughed really hard. First, my dad was a poor black man from Jersey. Literally. I’m not making lite of his life in any way.  He spent his childhood in foster care, his youth in juvy and a good part of his life adult life on the run or in prison for one criminal act or another. He knew hate, he knew pain, he knew sorrow.   Take all that, and in one night lift it. Replace that with peace, and the beginning of healing, love, and a functional family for the first time in his life.  He often reminded me little kid just discovering life … so he laughed great big belly laughs.

With all that in mind I was excited to see the place that the movie took it’s name from.  I’ll let you dig up the history of Tombstone yourself, but modern times it’s been a tourist destination.  I expected gun fights, street performances, and some fun western times.  I guess that’s how the “season” goes. When talking to the merchants we were told that this was not off season, it was dead season.  Many stores were closed, others were open but empty.

We ended up going to a “comedy show” that was comically horrible to say the least. When it let out we headed over to OK Corral only to find that we had missed the last show.  This was the reason we came here!  I was a bit annoyed. Once our initial disappointment wore off, however, we did have a good time.  We spent a little time walking the tourist area talked to the shop keepers and owners, and shot a dozen rounds of paint simulation rounds out of “cowboy” pistols.  While it wasn’t the experience we had hoped for it was a good afternoon.  I heard that spring break was a good time to stop by – Apparently it’s on the way to some popular destination down south, if you get my drift.  I hope to head there again some time.

Now on to New Mexico!