Places to Visit Tucson Arizona Casino Del Sol and a giant snake over the road way.

Tucson Arizona Casino Del Sol and a giant snake over the road way.

We left phoenix in the morning and arrived in Tucson after dark.  We only took one short stop for lunch. If you know the area you know that’s a bit messed up.  Tucson is only two hours from Phoenix, but we spend 5 hours at least sitting still on a closed highway and several more hours crawling at under 10 mph.  It was a miserable drive.   Luckily the place we were staying didn’t have check in or check out times.

While in Tucson we decided to stay at another casino on an Indian reservation.  Over the course of our travels this was our fourth casino. This particular one is well known for their dry camping hospitality. We will write more about this casino before we are done talking about Arizona but I feel that it deserves a separate post.

We ended up staying in Tucson for a week because of non travel related projects. Gail had a school project that required a field trip to a alternative medicine practitioner.  Tucson, in turn was a great place to find alternative medicine practitioners.  The hard part was finding ones that weren’t flakes or that were too busy.  The school project worked out well and what it was completed were able to move on. During our stay we made sure to explore the city, we even made it to church for the first time in a month.

Downtown Tucson is known for it’s art, and it’s southwest architecture.  I still can’t believe that the courthouse and Tucson is the type of structure that it is.  It’s mostly outdoor but least not enclosed and it looks like banditos are going to rush it at any time.  (It is a courthouse so I suppose there banditos their everyday anyway, just not shooting and raiding the place).  We spent a few hours wandering around downtown Tucson and made a special trip down Broadway to see the diamond back pedestrian overpass. Tucson is a mix of movie typical southwest western building and 1970’s and 80’s high rises. 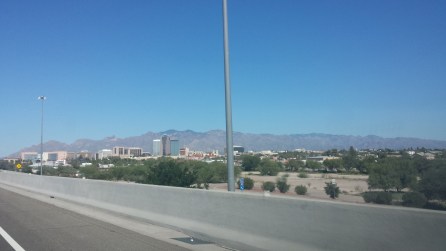 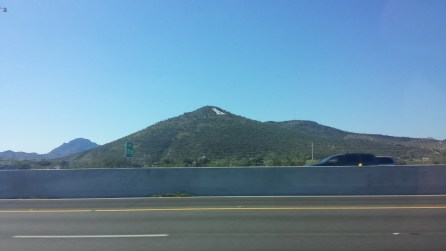 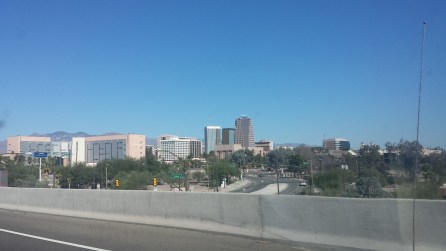 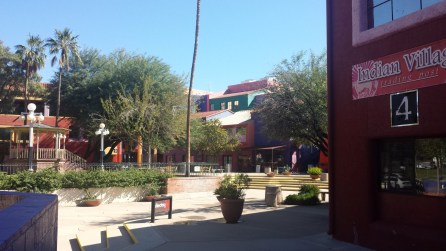 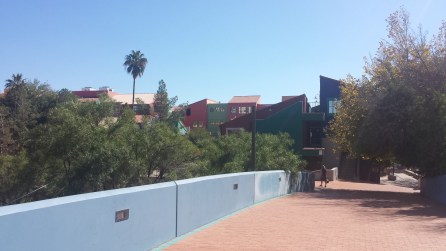 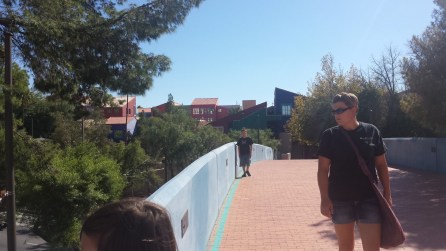 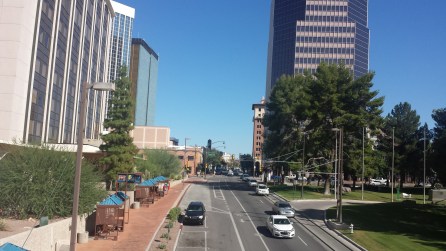 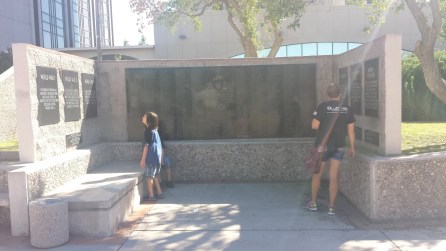 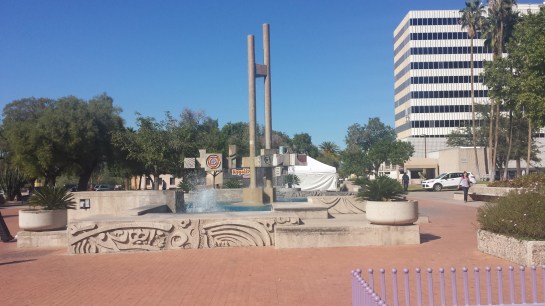 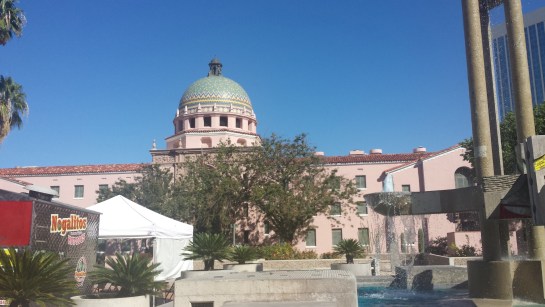 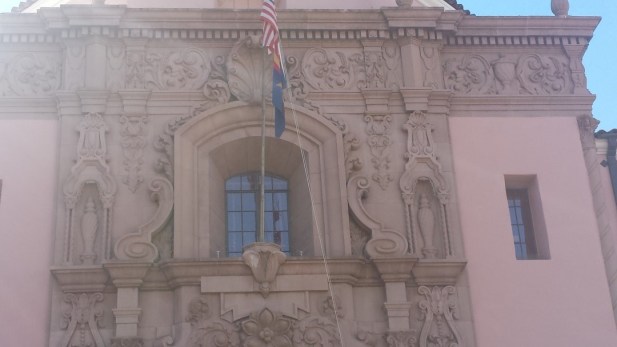 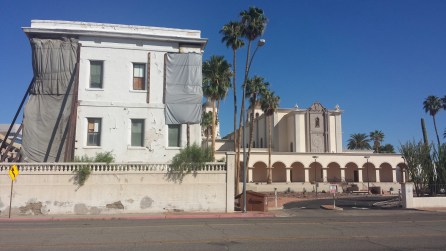 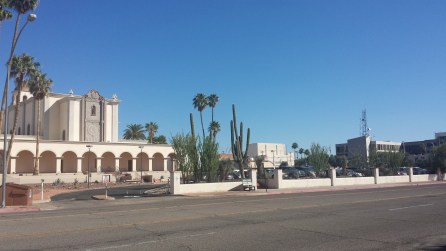 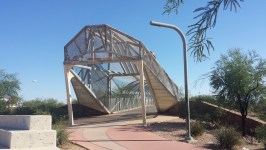 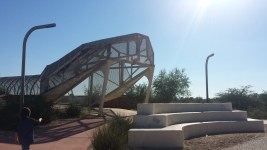 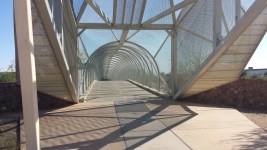 By this time in the journey we hadn’t ridden our bikes and several months.  I had heard there were some good biking opportunity’s in Tucson.  When we stopped at the visitor center in downtown Tucson we were told about the Tucson loop that is still under construction.  Once that’s done a little cover over 100 miles and allow a cyclist, walker or runner to completely travel around Tucson.  We decided to ride the 15 mile stretch near Columbus Park.  You ride along a river that really isn’t a river accepts during floods from monsoon season.  Yes that’s right there are states within the US that have monsoon seasons instead of spring winter and fall.  In fact Southern Arizona has three Seasons summer (you know november through march), monsoon (july) and death (all other times).

Speaking of seasons, this was a good season to visit the area.  Our Days were in the high nineties and nights were in the low 60’s, high 50’s, in October!  This is a welcome change from Denver’s climate this time of year.  Not that I would get rid of all of Denver’s seasons, it’s just nice to have some warmth left after October.

Oh ya the bike ride, it was fun.  We only made it about 10 miles down before we turned around, but …

We also spend some time driving around the Tucson area, Traffic was mild most of the time, but there are a larger amount of drivers that drive wildly.  It was not rare to see a honda fly by on the exit lane at 100 mph only to swoop over to the fast lane.  When driving a big vehicle, especially pulling the 5th wheel this was incredibly infuriating, by the time we left though we were pros, once it was clear we would signal, look and move, inspite of some one flooring.  I didn’t take it personally either when they screeched to a stop and passed us on the left hand side waving their friendly finger out the window.

We stayed at Casino Del Sol on the Indian reservation just outside of Tucson.  Casino Del Sol is a very nice casino.  They’re also very generous to those who choose to call their parking lot home.  After talking to security we found out that we were able to set up our jacks, unhook our truck, and even leave the RV there during the day, while we tooled around Tucson.  Also, after being there for a few days and spending time in the heat we asked the hotel management what would cost to let us use the pool.  She said that we were welcome to use the pool gratis.  I was shocked because any place we’ve been before either refused us access to the pool or charged us for keys.  We spent the better part of Sunday afternoon lounging at the pool. 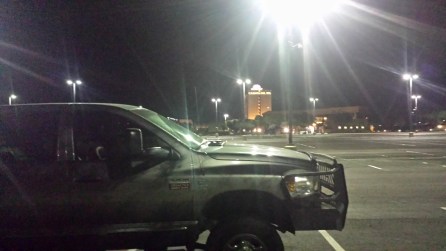 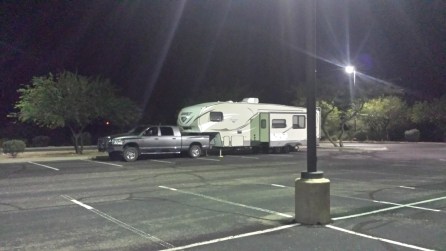 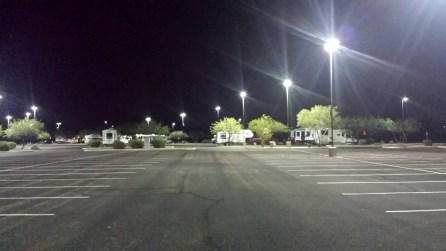 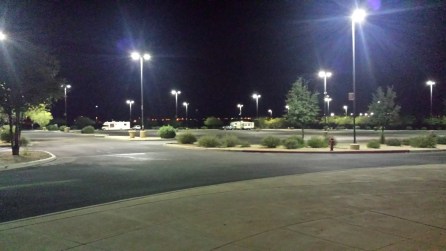 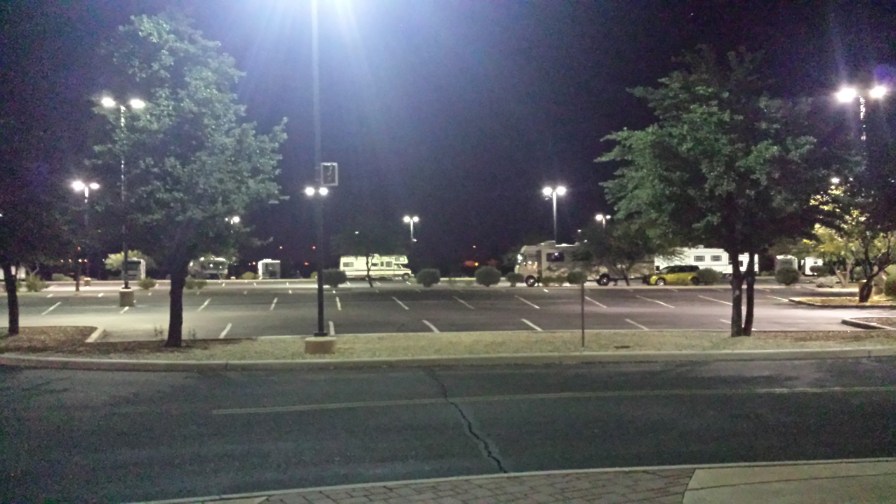 While in Tucson we took time to find a local church to visit. (finally, we wen’t driving on a Sunday). We ended up going to Unleashed Christian Church. This church meets in an old theater and is a very diverse church. Everyone was welcoming and friendly. Unfortunately google didn’t get the update on service times and we ended up missing a good part of the music, but it was nice to essentially pick a church at random and hear from a pastor who was honest and stuck to the Bible when teaching. http://www.unleashedchristian.com/

We visited several other places in tucson through the course of our visit. They were related to everyday things like local libraries, grocery stores, sam’s club, the mall, and a nice laundromat. I’m sure you are dying to hear about these so I apologise for not including more. I know, I’m sorry.