To round-out the Southern Missouri portion of our trip we went to Springfield and Branson, MO.

My wife had her first go-round with college in Springfield, Missouri, so we were familiar with the town. (It was not her first go-round because she partied out, but because financial issues prevented her from returning after her 2nd year.  This is a fact that we are grateful for because while school teacher fantasies abound, she has found her calling elsewhere.) We were not, however, familiar with downtown, the square or C street.

Springfield as a whole is not a bad place, – I remembered it otherwise – it’s sizable compared to where have been for the last few months and is similar to many metro-esk cities we have lived in. There are options, sights, some historic landmarks and plenty things to do for a visitor.   The majority of downtown Springfield is reasonable as well. There are a few high rises, the mandatory amazing looking church, and the super mega church that these mid sized towns are known for.  -here is wiki so i can save my fingers and let you look up more. 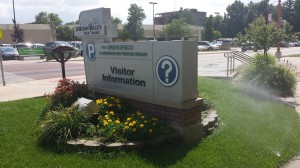 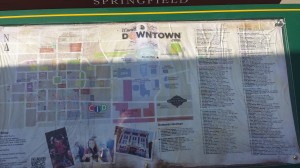 We went to the visitors bureau and asked for the highlights, other than national chains. A bit baffled, she suggested the fountain park near by, Downtown, The Square and C street. We were in downtown and there were local maps of down town all around so we headed to the closest attraction the kids would enjoy in 100 degree weather – the fountain park.

There was fun to be had at this park.  We got some pictures but missed out on taking pictures of  the lovely walking pools headed down to the fountains. Here are some highlights from the park

http://www.springfieldmo.gov/jvp/index.html – some more information about Jordan Valley, It looks like it will be a great location that’s off to a good start.

Next, we drove through but didn’t stop at the Square. It was small – less than one block radius with one way traffic and just a couple of stores. I don’t want to trash talk any place we go so please don’t take this as that. But the square looked like it had two or three open stores and a small theater. It was not a bad couple of hours but it wasn’t what I was expecting. Nor were our soaked kids up for it.  It’s small -the pictures were too befuddled to make any sense, but worth a look if you are ever down there.

Next on our list was C Street. Another thing that wasn’t what we were expecting. It’s a bit bigger than the square but not much was open.  The highlights were the footbridge over the railway and a stop for blended coffee at Big Mamma’s.  From the outside you can’t tell what it is, we thought it was a diner or something. Based on the name I was expecting southern cooking.  But on our second pass the front door was open and we could see it was a coffee shop.  I would defiantly stop there again and I think it embodies what they were trying to achieve on C street. I just wish more was open. 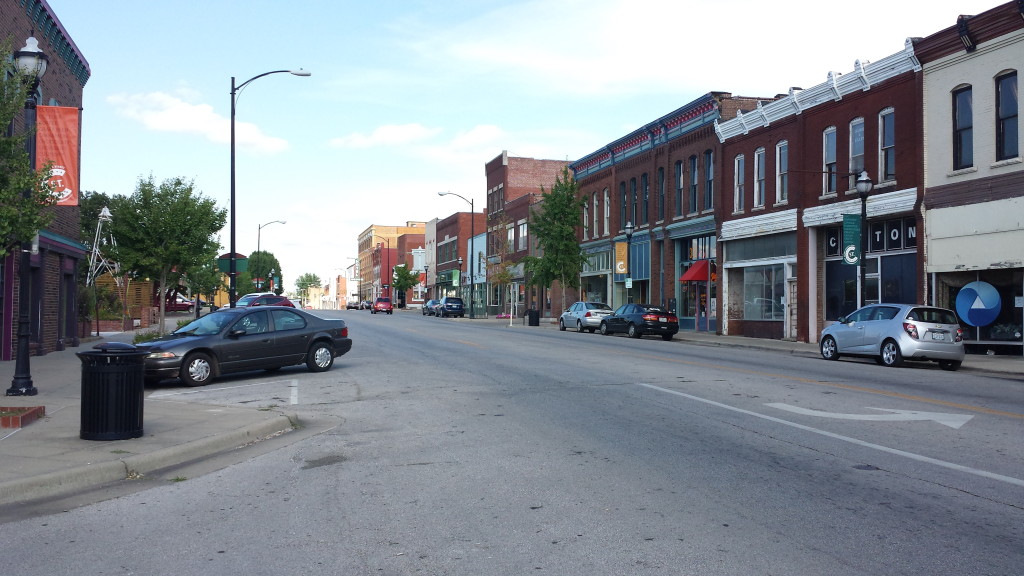 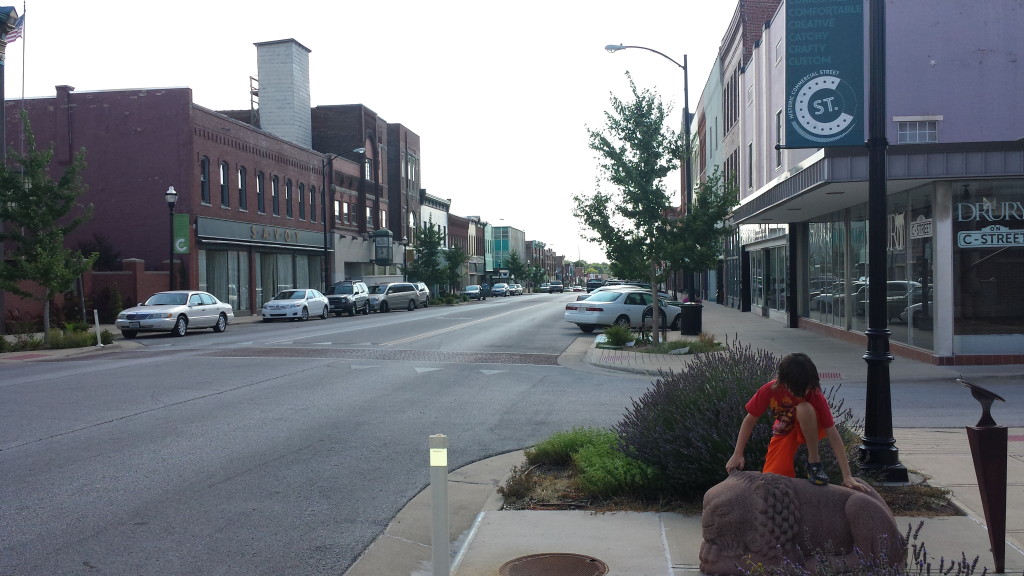 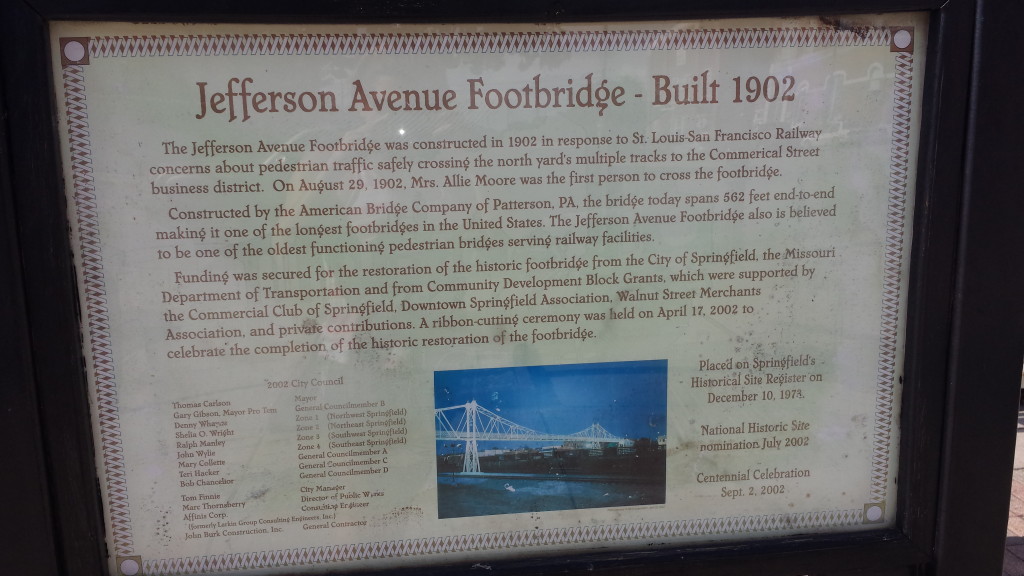 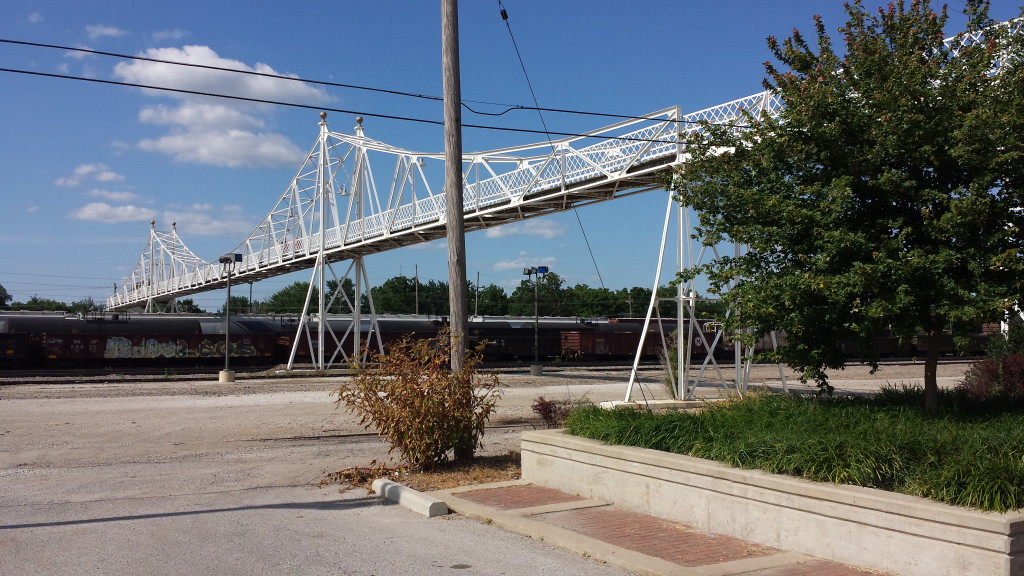 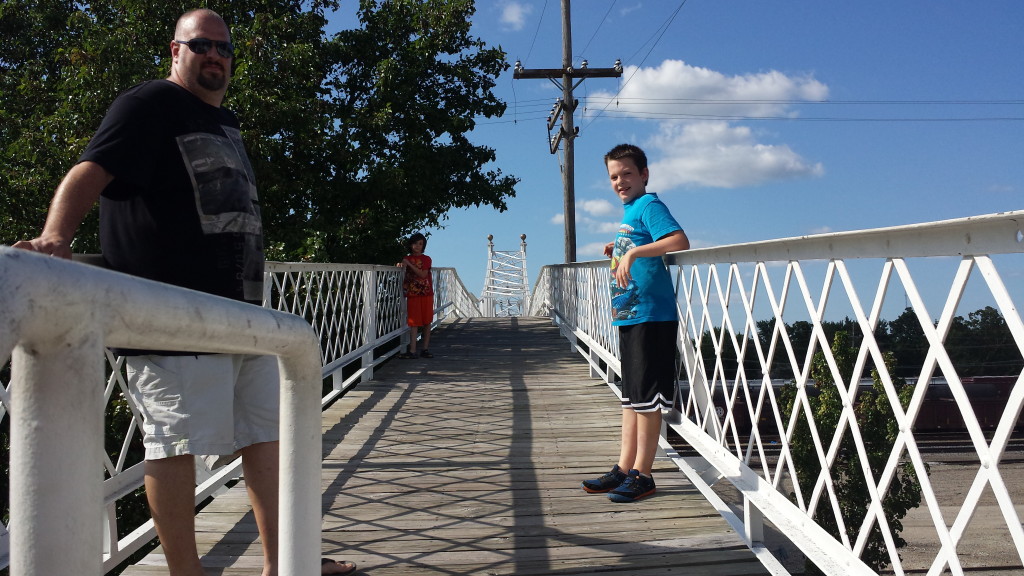 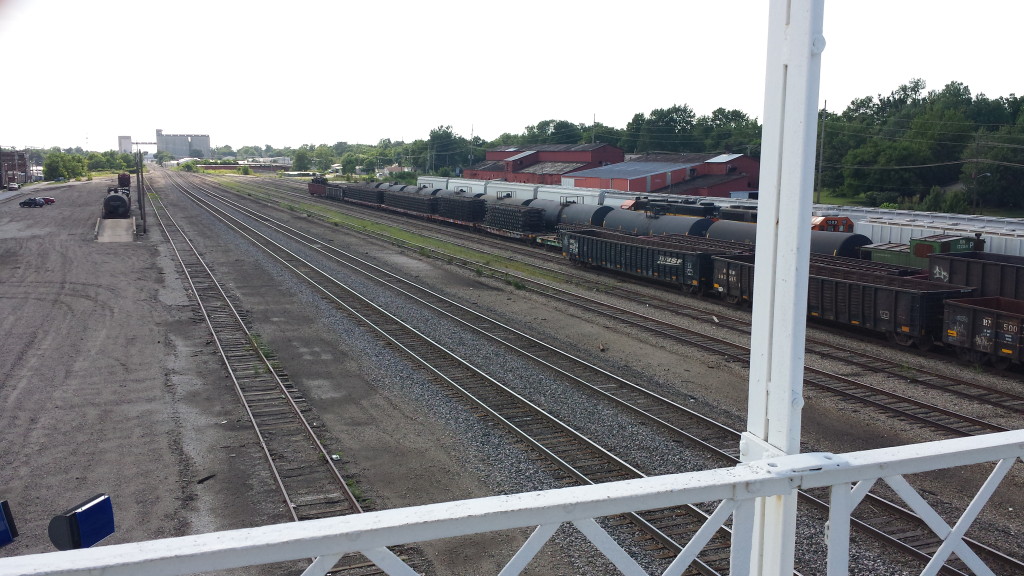 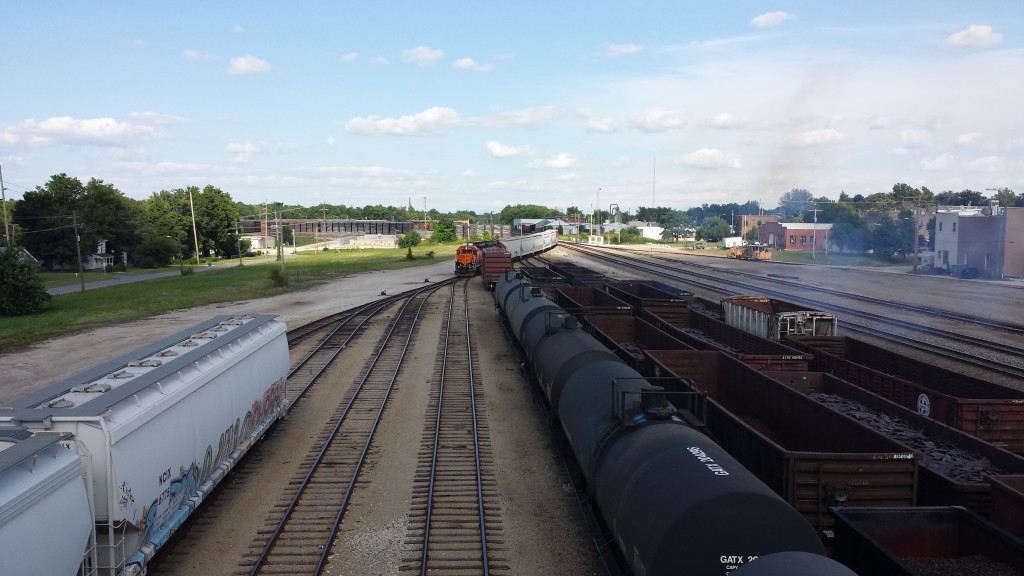 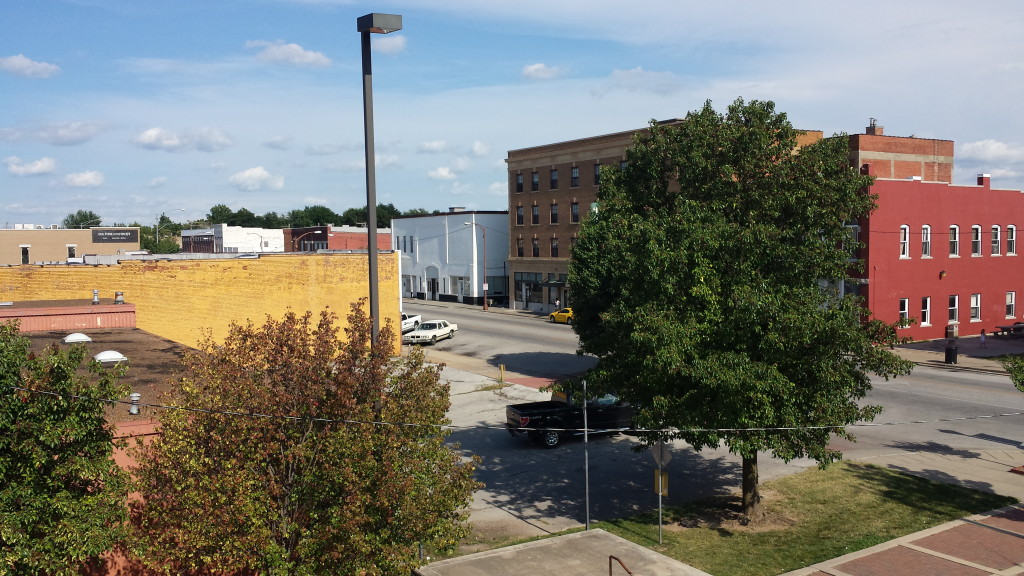 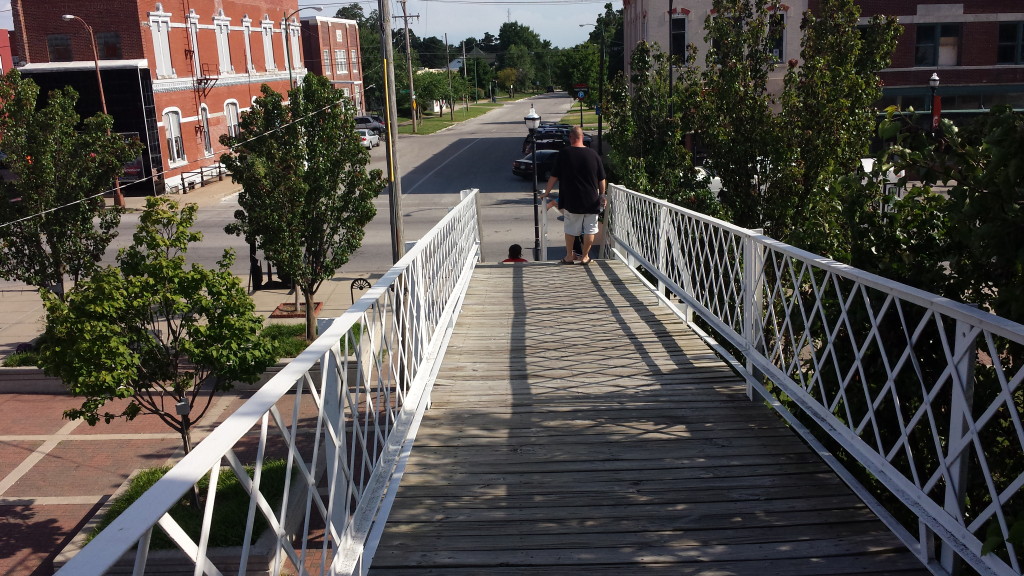 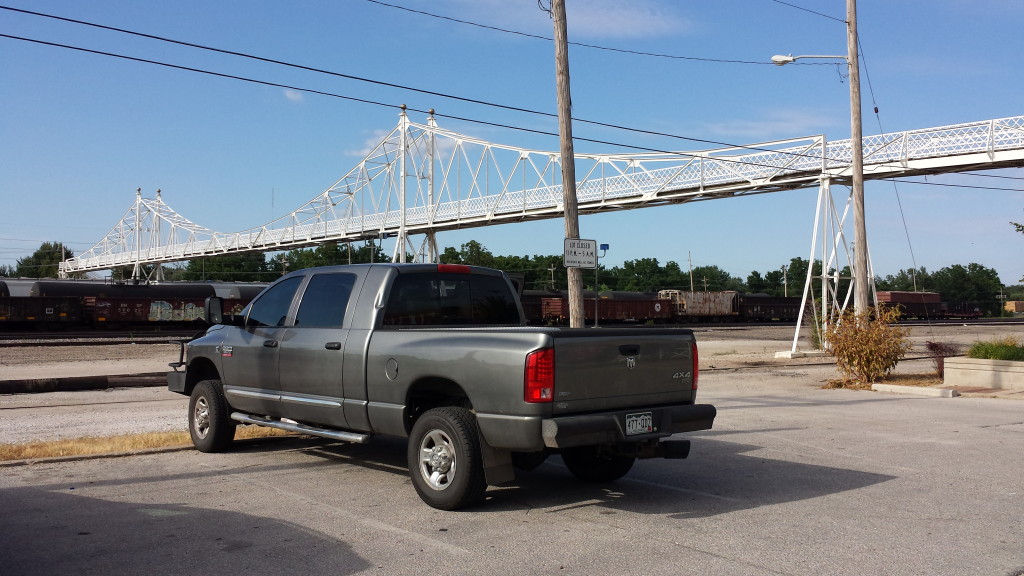 As an  added bonus we went to Battlefield Mall on our way out to Branson and saw this very cool piece of art. 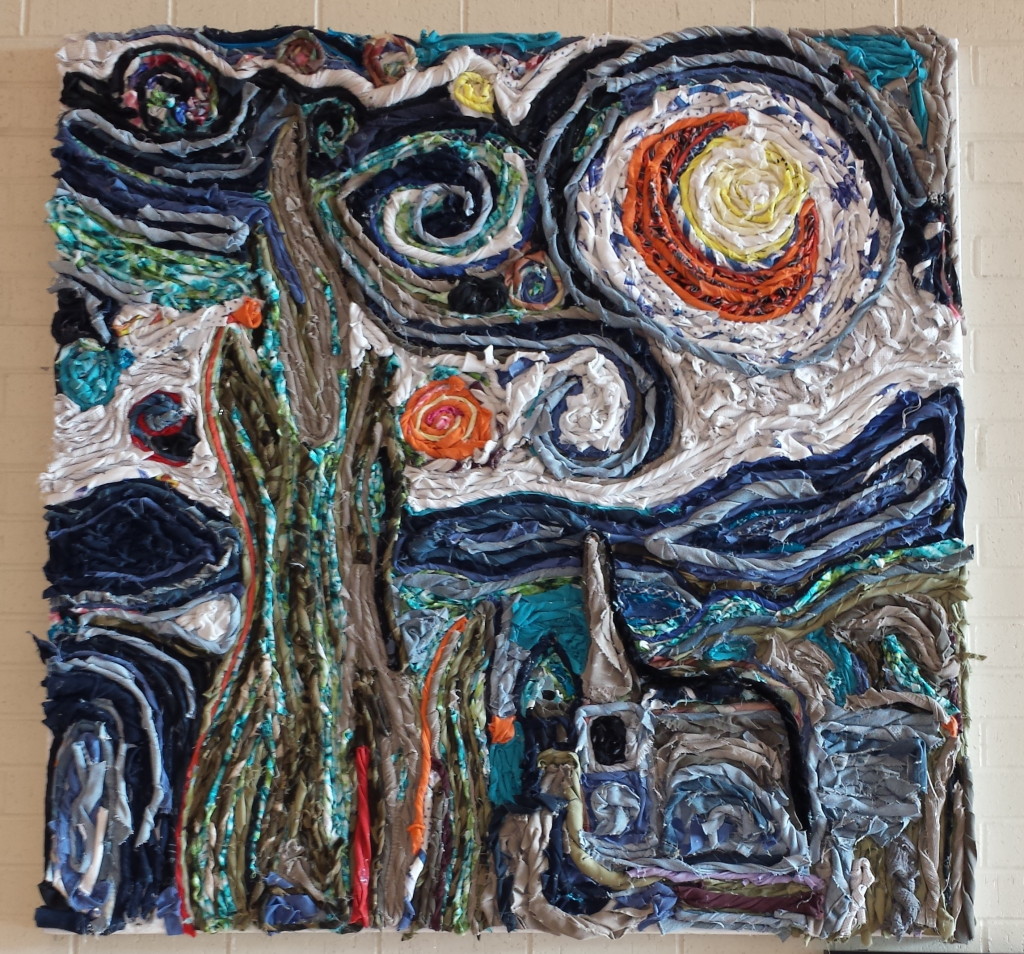 While Springfield was a mid-day stop we enjoyed our time there.  In an ocean of small towns it’s an oasis of choice and options.  It was a stop that was worth our while, and with more time there is much more to see.