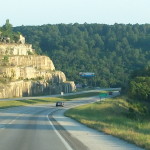 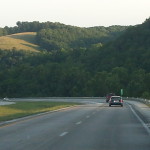 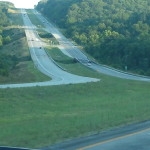 After a beautiful drive into the Ozark Mountains.  Nestled in the Ozarks, we spent two nights and two days in Branson, Missouri.  There are a fair amount of choices from hiking and biking to boating, shows, tours, shopping and tourist traps.  We wanted to see and do it all but didn’t want to pay for it all =) So kept our sights on exploring and at least finding out what it all was even though we wouldn’t be participating in much of it.  Just the act of finding it all first had took a few days.

First off, themed hotels and motels.  There are tons of them from scary looking horror movie motels … that really aren’t intentionally themed … to indoor water parks, to country and era themed hotels and motels. On a side note, many people try to compare Branson to Las Vegas in this aspect but there really is no comparison Branson is Branson and Vegas is Vegas, Branson is on a much smaller and less expensive scale than vegas to say the least. But in an homage to the comparison we rolled the dice on HotWire a night before we left – the only real gambling regarding Branson. We ended up at the Outback Motel and Road House. I was sincerely concerned once I saw what our Hotel was themed, the name alone sounded like a murder movie. For $42  a night after all expenses and taxes, I was sure it would at least be interesting.

We arrived in Branson at 7 pm. The main office was near the strip and Road House Motel was “around back and down the service road” – ‘so the people from the strip couldn’t hear the screams from the road’, I thought to myself.  The motel was 1/4 mile away from the office and it really was hidden from the roadway. I’m not even sure the good rooms could see the strip. 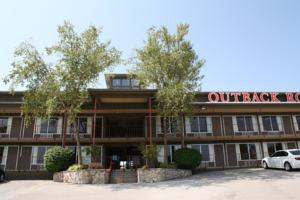 Could be good, Could be scary.

Once we arrived at our hotel, however,  we were pleasantly surprised.  The decor was simple but effective and the layout was interesting. The only thing Australian was the color scheme and the boomerangs on the doors with the door numbers painted on them. There was a pool and a deck with several grills available for use. It was nice especially for what we paid. This price is what made it cheaper to just take the truck rather than bringing the RV.  Oh, I almost forgot: we had real keys!

We were hungry and ready for dinner.  After a google search we decided to try the Grand Country Buffet.  At $7.99 and $4.99 for adults and children I was sold.  We walked the 1/2 mile back to the strip and across the street.  Once there we discovered it was a pizza buffet with a salad bar.  Really not too impressive.  My kids who had been starving ate 1 or 2 slices of pizza and a hand full of carrots, Gail did likewise. The pizza was cheap and mediocre, our ‘hells yes!’ pizza buffet became a gotta-eat-30-dollars-worth-of-this-crap-so-that-I-still-feel-like-I-got-a-good-deal pizza buffet.  The only redeeming factor was the dessert pizzas. The dessert pizzas were good and my boys ate quite a bit of that.

After dinner and our short exploration of the “Fun Spot” – the attached crazy busy arcade, put put, laser tag, laser wall, bumper car facility we walked the strip to see what was out there.  There are a lot of lights, a lot of shows, a lot of attractions, and a lot of shopping and eating.  If I had a million dollars – or even a couple thousand to blow in Branson, I could put myself in to a commercial coma of high priced buying, playing and eating gluttony =). Tongue in cheek aside, there were a few places we would have loved to visit and spend money on, if it was in our plans.  Our little sneaker-express-tour of the strip took a few hours. It was interesting all that there was to offer. Here are some things that stood out from our evening walk on the strip. If I’m ever in Branson again I will plan to hit some of these places.

Back at the Outback Road House and Motel, we arrived with enough time to shove our kids in the pool and make it to bed by midnight!

A cove at Table Rock Lake

Beautiful, pristine, amazingly clear (for the middle of the country), and blue-green waters are words that describe the water in the Branson area.  I had never seen water inland so clear you could see 6 ft or more into the water.  . Up early at 7 am the next day we found that Table Rock Lake is one of those places. we took the two mile hike from the boat docks to the Dam, then snuck across the road to the see the spill side of the dam-they really need a foot bridge or tunnel to cross the Dam. The hike takes you through some beautiful lakeside views, the River Queen, and up to the Dam visitors center.  If we hadn’t stopped to play in the water you could walk this trail in an hour or so, or run it in even less.  Us?  We ended up spending 4 or 5 hours on this trail and across the Dam. It was well worth the time to head out there. 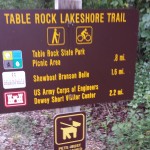 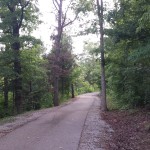 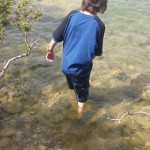 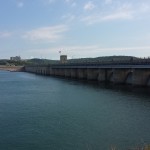 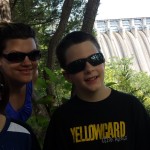 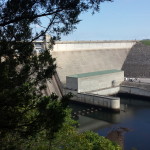 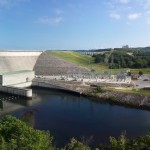 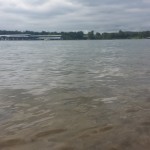 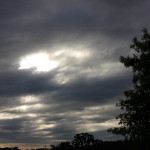 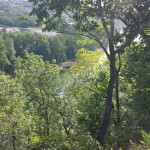 By the afternoon we were back in the hotel room taking showers, swimming in the pool and getting ready for the evening.  We stopped for lunch at Billy Bobs Dairy land (a cash only endeavor).  Their basic burgers are 1/2 lb minimum and are well worth the wait. Their shakes are awesome and everything is more home cooked than commercially cooked-if that makes any sense-hand made patties, decent seasoning, and a small menu. 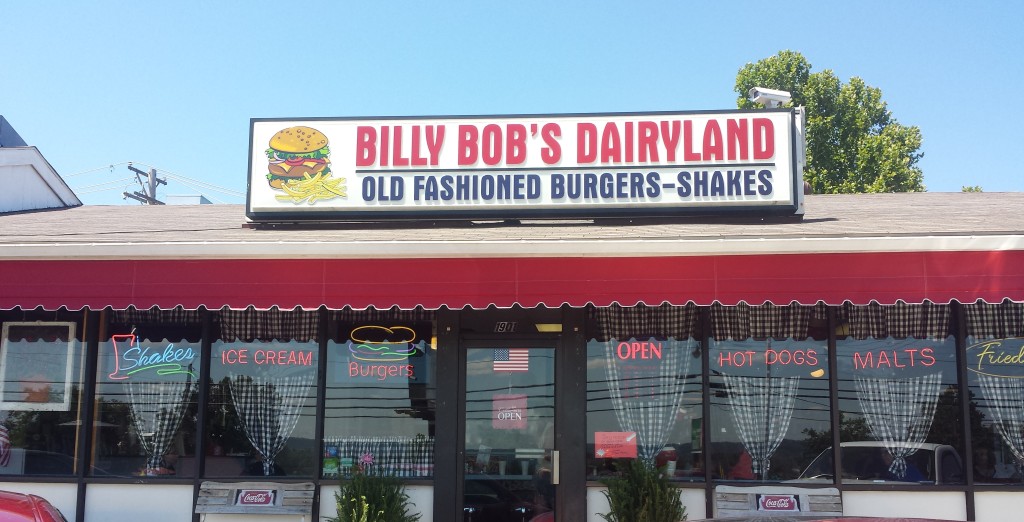 In the afternoon/evening we took off to downtown Branson. Downtown is pretty small, it’s only a couple of blocks. The main streets are crowded, have two hour parking, and are a pain to drive through. We ended up parking at Bass Pro shops-we later discovered parking on the other side near The landing.   From the parking lots you can catch a Trolley!  This is highly recommended.  Plan to spend 30 minuets or more on the trolley so you can see all of downtown, then loop back around to where you want to get off.  We found that getting off  before seeing everything meant it was a pain to get back on.  They run every 15 minutes but our stop behind the 5 and 10 was skipped multiple times-trying to get to the next stop was basically walking down town again.  In the end, the trolley is good for an air conditioned tour, but downtown is so small it is faster to walk than deal with 3 blocks of congested traffic. 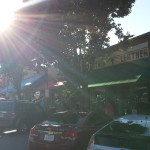 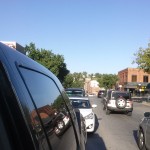 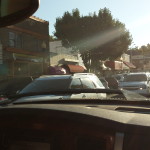 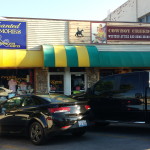 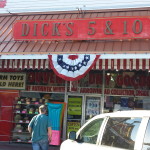 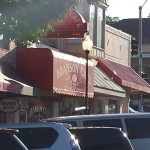 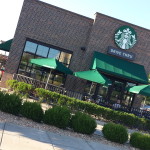 Downtown wasn’t for us, it was just too crowded and we weren’t there to spend money on trinkets.  There were a bunch of tiny shops and 5 or 6 thrift/flea-market type stores.  There is a little ice cream shop that we tried to spend money on but it closed early.  Actually there were 3 ice cream shops and all were closed before 4, I don’t really understand why.  After sharing our experience with others I received a mixed set of responses from “I love it like that!” to “That’s why I go in the off season”.  I really want to like it, but alas we ended up heading to the landing at about 4:30.

The Landing, to say the least, is an outdoor mall. It is nice and wasn’t over crowded. It had more space than main street but didn’t have any of the unique shops that people like.  In the end The Landing was a mall like almost any other mall, all known stores, all available in almost any city. Still, we liked the peacefulness and cleanliness of the landing compared to the crowds on main street.  I wish they could figure out how to make the two play together better, but after all, a mall is a mall.  The best feature that make it unique though, the water front and the water fountains/fire/light show. We had such a busy day it was nice to sit and relax.

Fountains at the Landing

By 7 pm every one was ready for dinner and bed.  We trekked back to the strip, grabbed a cheap dinner at Denny’s (a sit down dinner for $25 for four, no less). Then, back to the hotel to swim, pack up, and prep for the next day.

Our last day in Branson was a bit more urban exploring. We walked the strip some more and happened upon the Tanger Outlets.  Everyone we talked to in Missouri was ecstatic about the outlets, but after seeing so many it was a bit lack-luster.  Many of the shops were normal or above normal retail prices, but there were a few clearance deals to be had at the Disney Store, Old Navy, and Merrell. The fudge shop there makes several of their fudges locally, though they are a chain store, it wasn’t bad. 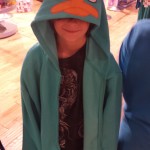 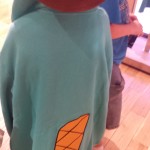 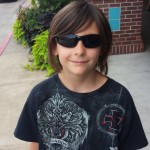 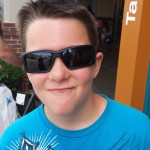 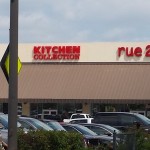 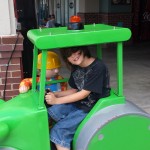 In the end, Branson was a consumerist explosion of Stuff to spend money on. Don’t think I am trashing it though, we enjoyed our stay.  If I had a house and needed to fill it with stuff I certainly would have been able to do so.  If we had room for nick-knacks (or weren’t planning on seeing much more across the country) there is a lot we would have done.  We loved our urban exploration and little finds here and there. The local nature is amazing too. We felt this was a good end to a good start.

Once we were were done in Branson it was time to head to Lambert’s Cafe and then back to Kansas … or so we thought.