The small ferry to the convention center.

Taking the small ferry to the convention center was a great decision … (I know what you are thinking  in yesterdays post you basically took the ferry to Coronado Island just to use the bathroom and then head back.  Eeehhh, well just wait). We got to see the Dole ship unload its cargo, see the most expensive sailboat in the world, and walk a part of the bay where there were tons more ships. We had to walk at a little heavier pace, but we got to see things we had never seen, and we made it back to the truck with two minutes to spare.  In all the hustle and bustle though, we realized that Zander had left his water bottle back on Coronado Island. 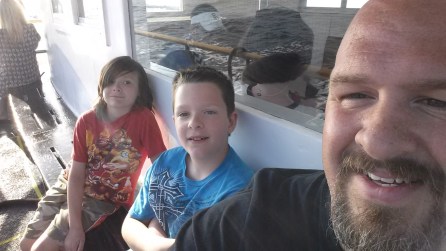 The boys on the ferry 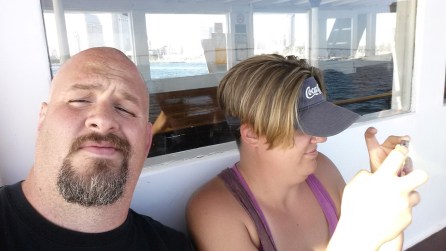 she is taking a picture of her foot 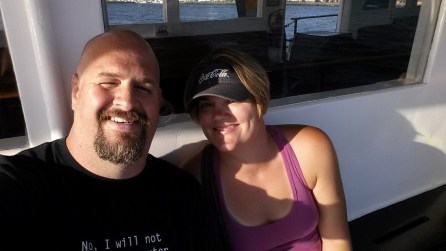 She know she’s been caught 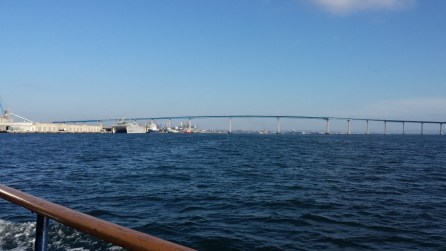 Corando bridge from the ferry 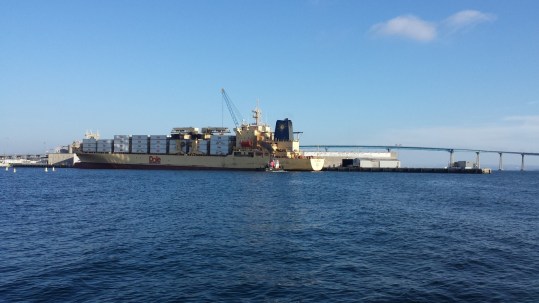 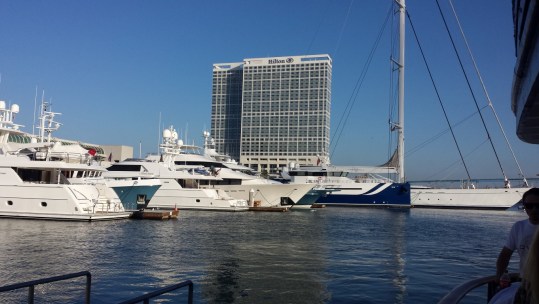 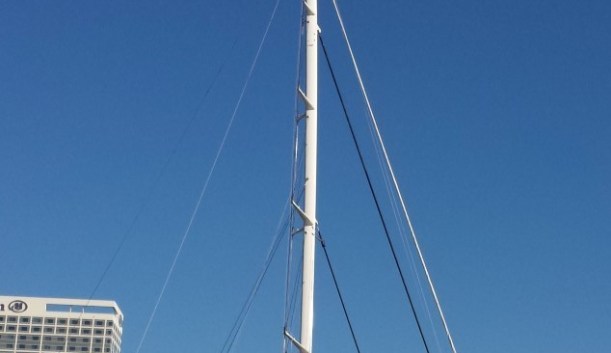 Zander felt bad.  After all, this was the 3rd or 4th time since we started this trip he had lost his water bottle. Amazingly, we have been able to find it every time but we were sure this time it would be gone forever. -I must explain our history with our nalgene bottles. Ours have been imbued with magical powers, they never break and they always return except for the 1.5 liter ones, they hate me. I left one on the top of an old Ford Explorer in Vegas and drove off. We heard it start to slide, looked in the side view mirrors, and saw something shoot across the road. We were sure it was lost forever. On our way out of Vegas we decided to take a peek as we drove by, not expecting to find the bottle anywhere. I saw something out of the corner of my eye as we drove past a dirt lot that looked strangely like my bottle. I pulled over to check it out and sure enough, that was it.  It was intact with some scuffs and tire tread marks.   I’m assuming it was run over by something and shot nearly 20 ft out into a field.-  And, back on topic…After a brief discussion, we decided that a mission to rescue his faithful water bottle seemed like a grand idea. Afterall, we didn’t get to see the island much and really wanted to drive over the bridge that gets you over there. We would infiltrate the islands defences and search for the bottle. Just like in every episode of Revolution, we launched a rescue mission.

The bridge to the island is a rather cool bridge that goes high in an arch, where most bridges would have an arch for support, it is the arch.  The bridge also curves to the right on the way to the island. The curve gives you a nice approach to the island that allows you to take in the scenes of the bay. Traffic was slow enough to be able to take some pictures from the peak of the bridge.  We even got a chance to see the the divider moving vehicle in action as came our way – shifting the center lane and making our side smaller.  It was pretty cool to see it in action.  I had seen pictures of a similar machine but didn’t know there was one here. 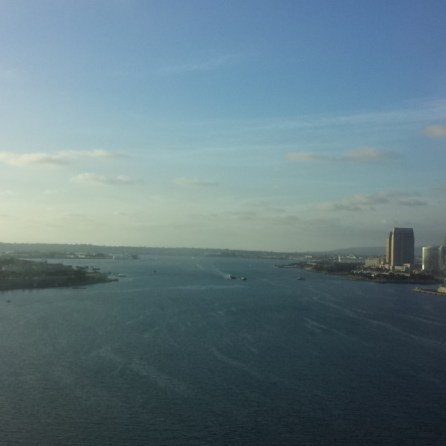 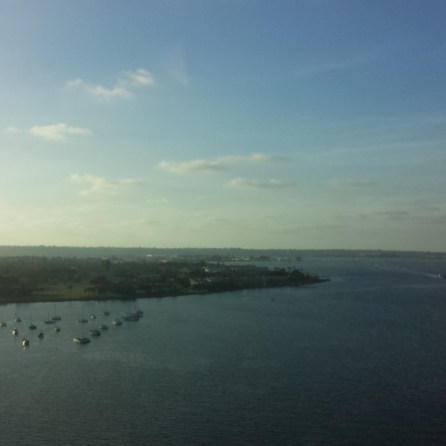 Once we arrived on the island and snuck past the checkpoints (there’s an old toll system set up , but it’s not in service) we worked our way to Coronado Ferry Landing to make our rescue.  Unfortunately, questioning the staff .. er interrogating the guards, they proved to have little information.  Before they set off the alarms at the base we rushed to the holding facility and check the cells (the mens bathroom stalls). Luckily the bottle was found right where Zander left it!!! The mission was a success.  (Yes, it got washed and sanitized before use!)

With the bottle safe in our possession and our rescue mission completed we needed to find a good place to celebrate. We walked over the information counter to see what else there was to see on this island.  The guy there seemed surprised at our ignorance, apparently when you go to the island you know why you’re there, other than rescuing a water bottle. In truth, I didn’t know much about it, again it wasn’t on our original plans.  He told us about the Coronado Beach and Hotel del Coronado and informed us that it was a one of a kind, big deal =). It only made sense to go see it.  The sunset was supposed to be exceptional. – on a side note, this trip has made us sunset chasers.  They are amazing. 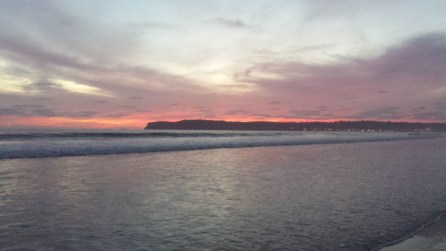 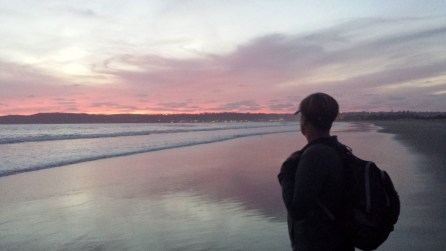 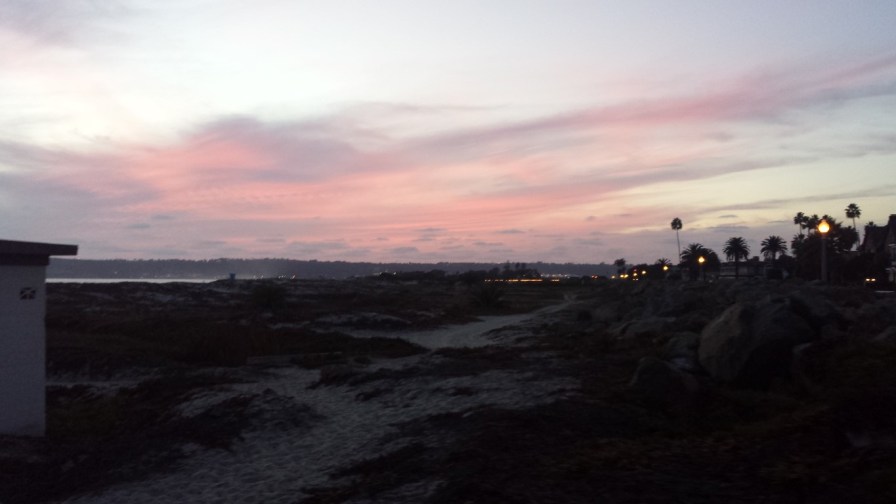 Coronado Beach is a beautiful beach. The scenery, the soft ample sand and warning of stingrays make this an interesting stop. We snapped some pictures and enjoyed the sunset. There is a sense of serenity that even our children picked up on. We had had a good day and this was the icing on the cake. We must have enjoyed the sunset and peace for at least and hour.  Once it was dark we decided to head to the hotel to take a look around. At my childrens behest (it was dark and scary) we walked the shoreline until we were parallel with the hotel. On the way up to the hotel we ran into The Sandcastle Man managing one of his masterpieces. Protecting it from those who would smash it – he was also keeping it hydrated!  He gave some castle building tips to my boys, and scared the pants off them with the ghost stories of the Ghost of Coronado.

http://thesandcastleman.com/  has more of his work and you can follow him on tumbler.

Low batteries struck again as we only got a few pictures of the hotel. But it was dark and we primarily use cell phone cameras.  I guess you’ll have to go down and see it for yourself … or you know click this link for a google search. This hotel has a rich history, and a history wing for you to learn about it. The hotel is very upscale and is one of the last all-wood hotels in country. With family rates starting at $400 a night and up, this is definitely a plan ahead stay and would be worth making this your once a year stop. At this time though we were happy to be able look around the hotel and head back to the RV for a good night sleep. That is, after our hour and half drive back to Vista =). Take a look at http://hoteldel.com/  for more information. 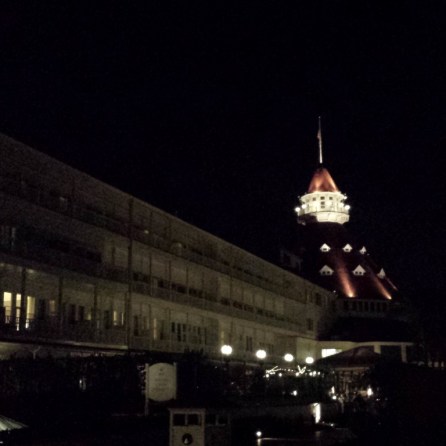 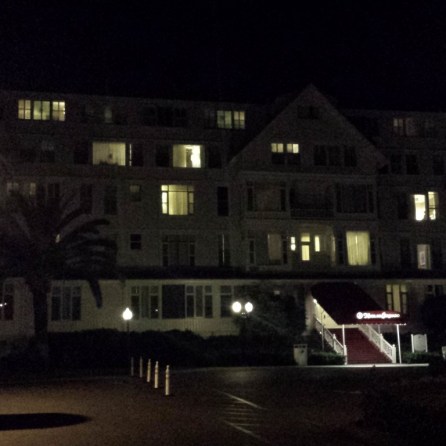 Our next stop? LA